Quick Summary - The engine power is second to none, but first 1/8 turn throttle response ​is extremely aggressive. (This is easily fixed with Too Tech ECU re-mapping) The bike turns on a dime - it is a front steering bike. The stiff nature of the frame enhances the turning manners but clearly reduces rider comfort in square edge bumps. (Too Tech can modify the rear engine mounts for a noticeable reduction in overall frame stiffness)   Too Tech Suspension re-valving, engine mount modifications and ECU remapping dramatically improve the Honda for a wide range of weekend racers.

Update notes:Notes - the 2021 frame is noticably smoother in the rough than the previous generation's. Using the same valving techniques we used from 2017 - 2020 CRF's produce even better results on the new frame. One very experienced 2022 owner said he thought our valving produced the best suspension he had ever ridden. We recommend this new model for all Honda lovers.

Update notes:Notes - the 2018 frame is more compliant (flexible) than other years. THE EXACT SAME REVALVED COMPONENTS TAKEN FROM A 2017 AND PUT INTO A 2018 PRODUCE A SMOOTHER RIDE WITH LESS HEADSHAKE. The 2019 and 2020 frame and swingarm changes are hardly noticeable. We recommend the 2021 CRF 450R Frame!

New CRF's wants to roll over, stick the front tire, hang out the rear tire, and turn with the gas on!  Updated notes:The 2017 through 2020 frames offer very precise steering, but with more terrain feedback and handlebar impacts than other manufacturer bikes. The 2021 is truly improved!

The 2017+ makes this style of riding easier than the 2015 even with the stock 120 / 80 (flatter crown radius) rear tire mounted. So the 2017+ rider can have improved turning manners AND have the maximum forward traction offered by the larger flatter crowned 120 / 80 tire size. Included in the handling category are the spring forks which clearly help with rider terrain feedback when approaching rough turns. (For reference, Rick began using a 110 / 90 rear tire size on his 2015/2016 CRF450R for better turning. The 110 / 90 rear tire helps the rear end 'hang out' in a flat turn so he could finish the turn with the throttle on.)

2017 is easier to ride feet up through rough or flat turns. Last years bike (2016) liked (needed) a berm to bounce off while the 2017 can hold it's turning line feet up through the rough and avoid the chuck holes as required. It commonly will come out of a turn on the throttle, straighten up onto the straight section, and then pull a wheelie on command from the throttle with relative ease. It is easier to ride than the previous model. Again the improved suspension helps with confidence in all terrain. The lower Center of Gravity must account for the secure feeling and control in the air!

2017 has a wider useable power band with more ultimate power and over rev. The 49 tooth rear sprocket begs the rider to use less 2nd gear and more 3rd gear in the turns, even tighter turns requiring the 'clutch in'. The power band allows far less shifting since it lugs out of the turn with plenty of low RPM torque and then follows through with mid range power wheelies on command and over rev for that jump face or continued acceleration into the turn. The upper RPM power continues to amaze. Its simply incredible and deceiving because it doesn't 'rip your arms off' like earlier KX or YZ's at lower RPM, it just continues to make more Horsepower as the RPM's increase. It is easy to forget what gear you're in because torque is plentiful at all times.... According to Vital MX, it has the second most HP with the new Husky in 1st.

The only negative for some riders will be an overly responsive first 15 degrees of throttle twist. It is reminiscent of the 2009 CRF450R that was hard to ride to the starting line without accidentally touching the throttle and having the bike jerk forward followed by slight "whiskey throttle". The 2017 is not that bad, but is too instantaneous just off idle for some riders.

See below for my simple ECU fix.

Showa 49mm Front Forks, with conventional compression on top and rebound on the bottom adjuster design. This design is tried and true mimicking the arguably best design from KYB used on all YZ's. Relatively new is the designed in 'air pocket' on the compression side. If tuners understand its purpose, they will use it to their advantage..... The inner piston and rod size has increased for 2017 causing more oil flow and thus better potential modulation of the oil flow / damping. Simply a great tried and true fork design with reasonably sized piston feeds and mid speed performance. They are easy to tune and offer no surprises when revalving! Both tuners and riders will be happier. UPDATE - For truly aggressive riders we have found that a free piston without the Air Pocket holds the front end up Higher!!

Spring Note: Stock OEM rear springs are an Open Coil design. The 2017 standard spring rate is 54 N/mm, which = 5.51 kg/mm (Newton = 1/9.806 kg) However, the open coil end creates a softer spring rate before the ends touch and increases the spring rate after they touch. In practice, the spring rate for approximately the first 4 inches of travel is 5.3 kg/mm, and changes to about 5.7 kg/mm for about the last 8 inches. This is a good spring for handling a wider variety of rider weights, but arguably not as good for MX. Some tuners believe (including Rick) that a Closed Coil spring design is better for MX since the actual spring rate is more consistent throughout the suspension travel. Note: 2018+ use a 5.8Kg/mm rear spring.

2017 Front and Rear Rebound in stock form - Rebound damping front and rear is over damped or too slow. Suspension might work for a flat SX track, but it will pack in rough terrain and may confuse a heavier rider into thinking the compression damping or springs are too soft. Try faster rebound settings in rough terrain and/or when bike is new and suspension is not broken in.

2017 Compression in stock form - Compression damping is mixed. Front fork valving might be reasonable for heavier aggressive riders, but clearly stiff for lighter and more agile riders. (Note: the overly stiff shock may cause a rider to think their forks are too soft. We have seen several lighter riders think there forks were too soft until they reduced their rear compression damping.) Fork valving changes for rider preferences are easily implemented and the results are straight forward. Shock valving might seem soft for heavier aggressive riders, but it will be stiff for lighter riders. Heavier and/or aggressive riders will benefit from more low speed damping to hold them up in G outs while lighter riders will benefit from less high speed compression.  I suspect almost every rider will benefit from a redesigned compression strategy along with installation of the correct spring rates for their weight. The Showa piston incorporates a smaller feed hole design than the past years of KYB; this may confuse some tuners.

2017 Revalving results For 165# Rick: Many folks know that Rick (#222) is the consummate VET Rider who likes his bike to soak up all of the chop. He uses .49 Kg/mm springs up front, 5.4 Kg/mm closed coil rear spring, with strategically softer compression and rebound settings that complement the compression valving. After several internal changes at the track, the results are a race bike with a soft suspension that absorbs the chop and maintains the as delivered turning manners and plenty of the bottoming resistance. The bottoming resistance is greatly improved over the previous model which Rick believes results from an improved spring fork and the smaller Showa piston design.

2017 revalving results for younger aggressive riders who prides themselves on 'going big' off the jumps: Many younger and aggressive riders simply prefer a bike which rides higher in the stroke and always has compression stroke left for the unexpected jolts, chop or jump landing. These riders would benefit by changing to the 2018 spring rates .51kg/mm front and 5.8 rears. These spring rates are increased farther for heavier and/or Pro level riders.

Notes: Be careful when changing rear springs; the 2017+ CRF450R uses a shorter shock spring and a larger diameter fork spring.

Suspension is very personal and 'One Size Does Not Fit All'. Too Tech enjoys a challenge, and working with a wide variety of Off Road riders, MX racers, and Pro level competitors. Give Rick a call to discuss your suspension needs.

ECU power and throttle sensitivity changes available from Too Tech:

Too Tech has already done exhaustive 'power band' testing for himself and other MX test riders. Our mutual conclusion was that the stock Map 1 was the best stock map of the 3. (BTW - Map 1 cannot be changed) We didn't need a slower Map 2 and didn't like the abruptness of Map 3 without the reward of more peak power. So we focused on improving Map 1 with a new design for both Map 2 and Map 3. Map 2 was detuned for the first 1/8 throttle opening to avoid accidental jerky response at minimal throttle opening (and riding in the pits LOL). Then before 1/2 throttle opening,  more power was added and beyond 1/2 opening we upped the power further. Map 3 was detuned similar to Map 2 at 1/8 throttle opening and then brings the power in more aggressively throughout the entire throttle opening. Additionally aggressiveness is available for more aggressive Pro's and heavier riders to provide more 'instantaneous response' to throttle changes.

Final note about rider preferences: (After reading the article from MXA's test of Ken Roczen's 2016 RMZ450 'RACE BIKE', Rick feels no guilt riding a soft suspended race bike. MXA described Roczen's bike as having "VET SUSPENSION COMPLIANCE" which could be bottomed by their test riders,  Rick's comment, "If the fastest man on the planet uses suspension settings described as 'Vet Settings', then this validates my soft preference as well. Now if only I could go his speed ! ".... 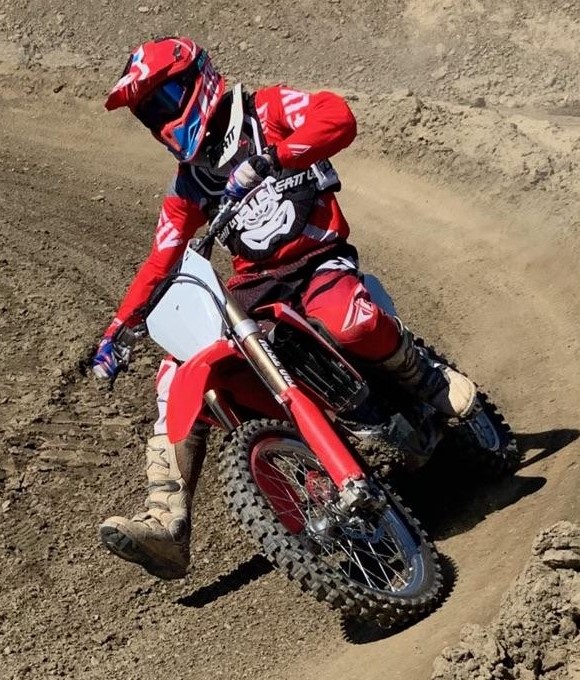 2018 CRF450R
Paul is a new customer who followed a friends recommendation - These are his comments:
"Wow, huge difference! The new mapping was perfect, the power is so much smoother and predictable.
The suspension worked much better through those acceleration and square edge bumps which were torture before.
Thanks a million – it’s a whole new bike !
• The Mapping change made my inside line cornering so much easier. Before, as soon as I would role on the throttle the power would hit and the front tire would jump out of the rut. Now it rolls on so much more controlled that I can stay in the rut.
• It seems as though I can lug the engine down to a lower rpm without it stalling."
Thanks
Paul Huffman